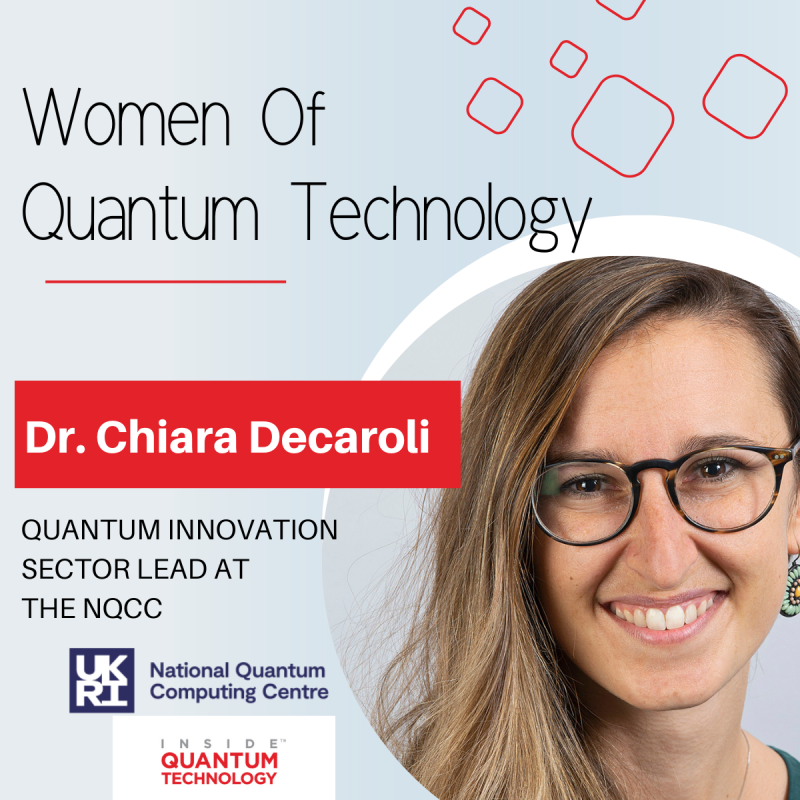 Because the quantum industry is so new, many individuals are working to find ways to bring in talent, partnerships, and overall awareness to the ecosystem. One of these individuals. is Dr. Chiara Decaroli, the Quantum Innovation Sector Lead at the National Quantum Computing Center (NQCC) in the U.K. Decaroli’s work bridges both technical science and networking as she helps to enrichen the quantum community. With instrumental work like organizing and leading the first NQCC Quantum Hackathon, Decaroli stands out as a pillar of innovation in this ever-growing space.

Thanks to a high school reading club, Decaroli became interested in quantum physics. “My physics teacher at the time proposed a book by Amir D. Aczel titled Entanglement, and despite understanding a minimal percentage of the book, it really hooked me,” Decaroli explained, “I felt as if I had stumbled upon a topic that was really fascinating and complex that felt like the most fundamental and deepest layer of reality. I was intrigued to learn more.” Her seemingly bottomless curiosity propelled Decaroli to study experimental physics at the University of Edinburgh followed by a Ph.D. at ETH Zurich University focusing on using trapped ions to build quantum computers . Even now Decaroli still uses her curiosity to fuel her passion. As she explained: “In general, I have always been in awe of nature and the ways that things around us work. I am a little stubborn, so I tend to not be satisfied with superficial answers, I need to get to the bottom of it!”

After moving to the UK, Decaroli found herself at the NQCC. “I started out with a role focused on end-user engagement, which allowed me to leverage my technical knowledge as well as focusing on building an ecosystem,” she said. “I was creating relationships with a variety of stakeholders in the field, ranging from people working in industry, government, regulator bodies, research, and of course, the general public too.” More recently Decaroli has moved into her role as the Quantum Innovation Sector Lead at the NQCC. “My position is at the interface between a technical role-which involves staying on top of recent progress and developments in hardware, software, and algorithms research; and an innovation role, which involves nurturing relationships, building an ecosystem, and setting up activities and programs to support those interested in engaging with the technology,” Decaroli said. Besides organizing and leading the first NQCC Quantum Hackathon, Decaroli has led many other successful initiatives. “I have worked on a project to develop an educational online course on quantum computing and I have coordinated a series of activities targeted at the business and financial services sectors.” Thanks to Decaroli’s initiatives, the NQCC is able to provide valuable resources for many who are interested in learning about quantum computing.

Through her previous academic career, Decaroli was highly involved in diversity and inclusion activities – which led her to win the first ETH Diversity award in 2021. As a result of her efforts around this topic, and her interactions with women researchers in quantum physics, she thinks that there need to be many changes to the quantum industry to make it more inclusive, especially in company culture. “Simple examples are the choice of topics which is discussed at lunch, the ways people interact with each other, the level of appreciation and support which is expressed by colleagues,” Decaroli explained. “All of these could contribute to creating environments that are very challenging for women to thrive, as a result, they end up leaving the field.” Besides these examples, Decaroli offered others, including allowing women to incorporate childcare into their careers. “We also need to stop encouraging a workaholic culture in academia, which is completely incompatible with a family lifestyle that women in their late twenties might aspire to,” Decaroli added. “We must start recognizing other measures of success, not just mere technical achievements, but also how many people a person has mentored, how many collaborations they have maintained, how connected they are with their colleagues, and activities they have pursued outside their narrow role.”

Besides all this, Decaroli believes inclusivity ultimately boils down to representation. As she explained, “We must absolutely increase the number of female leaders in quantum technologies. If you are an ambitious female student/employee, you will quickly start to think to yourself, ‘is there really space for me to grow and aim high in this field, or is it just for men?’”

Kenna Hughes-Castleberry is a staff writer at Inside Quantum Technology and the Science Communicator at JILA (a partnership between the University of Colorado Boulder and NIST). Her writing beats include deep tech, the metaverse, and quantum technology.