What The Bat? Review: A Home Run

Very few games have ever made me smile the way What The Bat? did.

The second game in the What the _? series of sports-inspired games from Danish developer Triband, What The Bat? presents an experience dripping in charm and creativity that’s only held back by a slightly shaky transition into VR. Minor technical gripes aside, What The Bat?’s cheeky writing, imaginative level design and relentless sense of wonder make it a grand slam.

What The Bat? bears the unenviable burden of following up What The Golf?, a game I presumed to be lightning in a bottle. Its ever-evolving take on what golf was had me questioning the sport’s existence on an existential level, laughing all the way. However, What The Golf?’s towering highs serve less as something to aim above, but rather as a spiritual framework for What The Bat? to play around in. I don’t think this tops its predecessor, but it doesn’t really have to. In fact, they’re largely different games, save a few endearing nods to What The Bat?’s mobile progenitor.

What the Bat? Review – The Facts

In What The Bat?, your normal VR appendages — usually guns, hands, swords or some combination therein — are nowhere to be found. Instead, you’re outfitted with a pair of baseball bats à la Edward Scissorhands. Even in levels where you use the bats for their intended purposes, like smacking a line drive, you’re presented with a wild twist that makes you rethink America’s pastime.

Sometimes the challenge is simple, like hitting a baseball through an American football goalpost. Others? Not so much. You might need to electrocute yourself to complete an electrical circuit using an electric eel and some well-placed wires, or plug holes in a leaky pipe in the right order to dislodge a trophy from a toilet. To prattle on about each individually creative exploit in What The Bat? would be to ruin the game’s one-two punch of slapstick charm and confoundingly-creative level design.

This relentless sense of creativity is highlighted by What The Bat?’s reluctance to revel in itself. The moment you think you’ve found your footing, a trap door opens up underneath you. From stopping an art heist to bonking the side of a hot dog vending machine that’s taking a bit too long, this game moves from mechanic to mechanic at breakneck pace. This leaves little time for any idea to grow stale and no mechanic shows up more than a handful of times, at least not in the same way. There are a few exceptions to that rule, but even mechanically similar levels across the game that require using an in-game joystick (a comically difficult task to execute when your hands are baseball bats) see you controlling drastically varying vehicles and items.

What The Bat? Review – Comfort

What The Bat? is a roomscale VR experience with no artificial movement or teleportation. The puzzles take place in small environmental vignettes, where the only movement you’ll make is physically moving within your real play area. It should be a comfortable experience for most users.

The only time I found What The Bat? overstaying its welcome was in a level where it committed (what I consider to be) the cardinal sin of puzzle design. Like many in the game, the level plays off mechanics introduced earlier on. However, the mechanics here were modified in a way that relied on obscuring the solution in a strange way. I spent at least half an hour trying to progress through this one level, until I was brought to my wits’ end. Ready to give up and put my headset down for a while, I only then noticed the solution while leaving my play area, obscured from the player’s normal point of view. 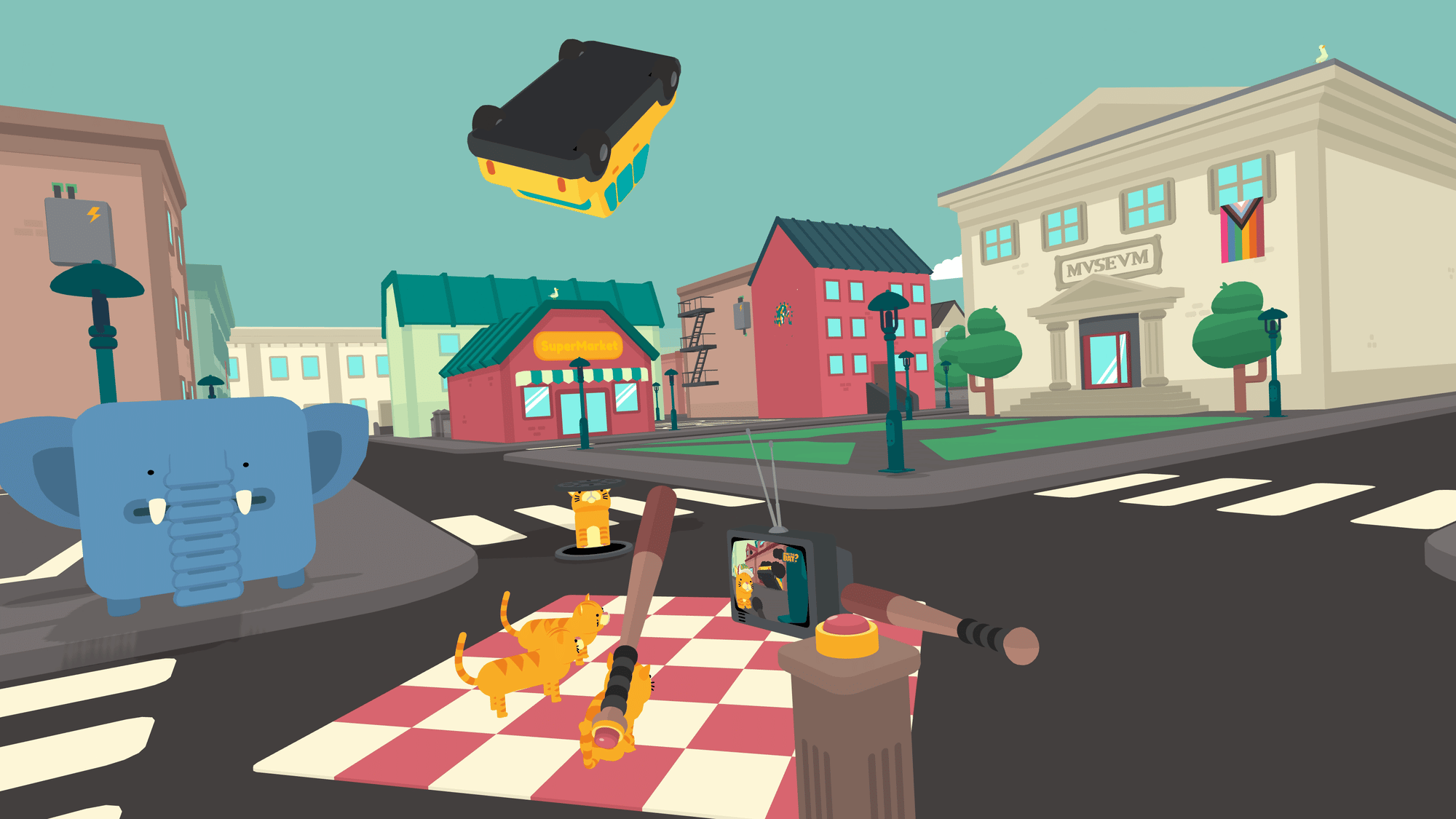 This small gripe represents a larger issue with What The Bat?; the series’ transition into VR isn’t always the smoothest. While VR as a medium allows for new levels of interactivity and immersion, its limitations and unique means of interaction can clash with traditional puzzle game design. As a result, some of What The Bat?’s puzzles don’t feel ideal in VR.

Those puzzles are still inherently fun – it’ll always be enjoyable to smash the stitches of a baseball with a hearty swing, without the burden of having to retrieve it. The worlds and mechanics presented in What The Bat? are always delightful, but the puzzles that I found dissonant with the limitations and mechanics of VR usually presented a frustratingly unclear goal. Sometimes it meant floundering in front of a vending machine for half an hour, or putting my arms in awkward positions to clog leaky pipes. Nothing was ever unobtainable, just confusing enough to get frustrating.

What The Bat? Review – Final Verdict

Minor warts and all, What The Bat? is a deceptively complex game that begs to be shown to friends and family members who might be interested — or even skeptical — about the medium. It’s a great game to cast to a smart TV and pass the headset around to a room full of people. My problems with What The Bat?’s rare, frustratingly obscured puzzles are so microscopic compared to the joy this game brought me that I’d be kicking myself if I didn’t recommend it. Having played baseball for a solid third of my life, I can confidently say that I had far more fun with What The Bat? than I ever did with the real deal. If Triband keeps releasing games with this cadence, its next might be a contender for best of all time.

UploadVR recently changed its review guidelines, and this is one of our Recommend review labels. You can read more about our review guidelines here. This review was conducted with the Meta Quest 2 version of the game.