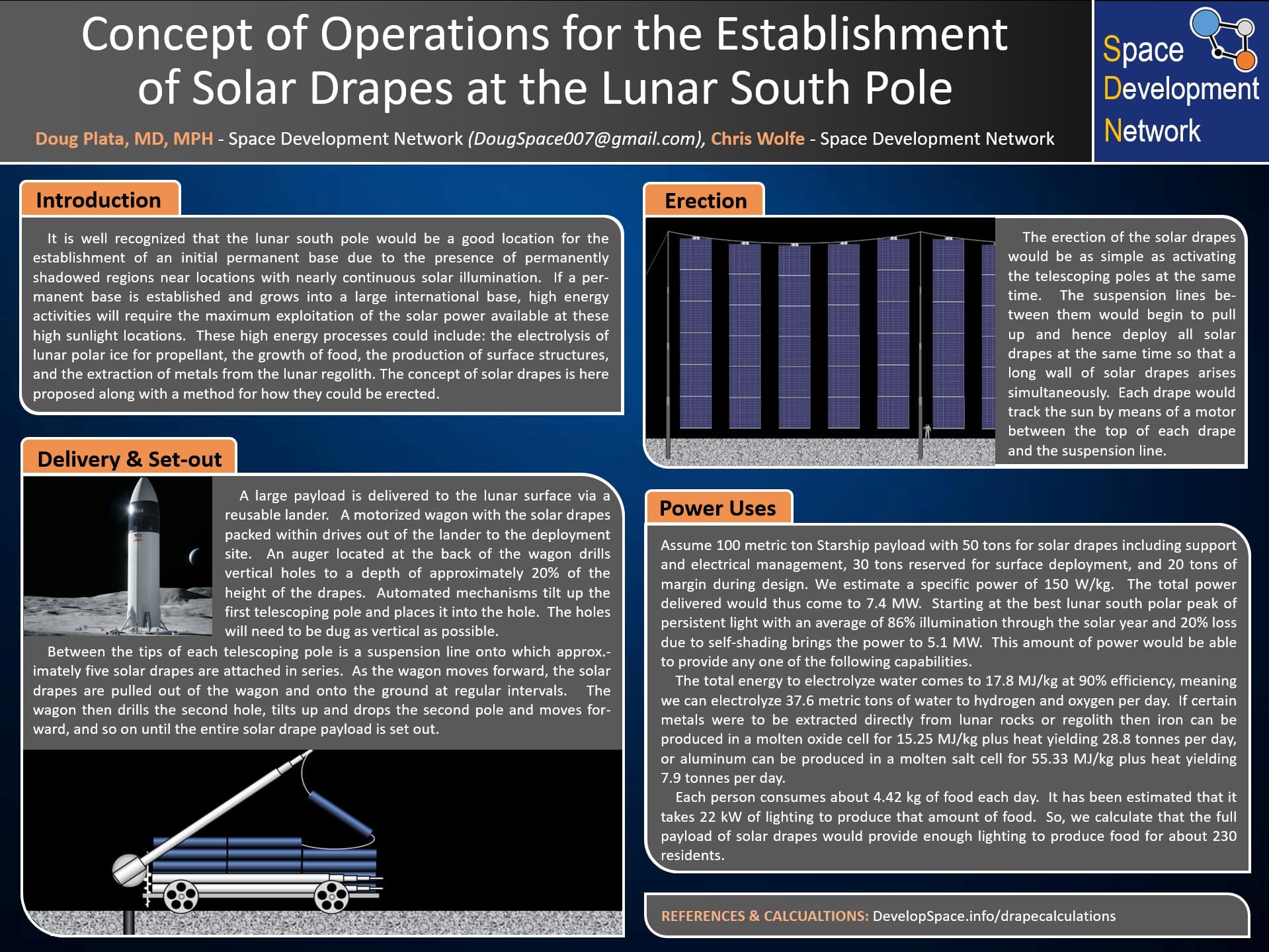 Doug Plata and Chris Wolfe have an updated design for solar drapes for gathering power at the South Pole of the moon. They looked at how much power a single lunar Starship (100 tonnes) could establish at the best so-called Peak of Eternal Light (PEL) at the lunar south pole.

The concept of operations would be for Starship to deliver a teleoperated wagon that would have telescoping poles and rolls of thin film solar drapes hanging from a suspension line between the telescoping pole. The wagon would move along the PEL ridge using an auger to drill vertical holes every so often and then tilting up and dropping a telescoping pole into that hole. As the wagon moved along, each drape would automatically be pulled out by the suspension line. After all poles were in place, motors would simultaneously cause the pole to telescope, raising the suspension line between them, and hence causing an entire wall of solar drapes to rise up.

The most significant part of the poster is the last section indicating how much could be done with the resulting 5.1 MW of power.

The proposed system is built from 30 spans (33 telescoping supports) and weighs in at 48.8 tonnes and produces 7.38 MW. There is a 30 tonnes payload budget for the deployment hardware and cabling from the array to the settlement, plus 20 tonnes of payload margin. They are using additional margins elsewhere in the estimates, but these numbers overall are very achievable. The power-system performance is about 150 W/kg and an all-in mission performance of 92 W/kg with comfortable margins. The highest one could reasonably estimate here is 12 MW, which assumes 80 t is reserved for power hardware and 20t for everything else.

Efficiency
One option for the PV blanket is an expensive three-junction thin film made using a lift-off process. This gives an alpha of 2.6 kW/kg (efficiency of 26%) at end of life (after ~20 years of irradiation in space). A cheaper two-junction thin film made with PVD or CVD techniques might achieve an alpha of 600 W/kg at 20% efficiency for perhaps a tenth the price and better handling characteristics. Let’s assume this is selected and gain some confidence that if necessary there are higher-performing options coming in the near term if money is no object.

Size
Assume each blanket is 2 meters wide and separated by 2 meters; each meter of height then generates 547 W and masses 911 grams. A 30-meter tall blanket would generate 16.4 kW and mass 27.34 kg.

Voltage
Further assume that the system uses three-phase microinverters. These collect ~30V DC power from a section of each blanket and convert it on the spot to 480V three-phase (Wye) AC. Using a three-phase system greatly reduces the onboard power storage required, so the boards can use thin film capacitors instead of electrolytic caps. That offers mass savings and greatly increased longevity as well as high efficiency, typically around 98%, which in turn reduces heat loads while spreading them across a much wider area. Higher voltage AC power minimizes resistive losses in cabling (due to drastically lower current) and maximizes the performance of whatever central transformer is used to step down to the settlement’s grid standard (probably 48V DC). Lastly, 480v three-phase AC is a common industrial standard and three-phase AC power is ubiquitous in industrial motors and certain high-power applications like iron and aluminum production.