Bad News Eagles were the feel-good story of the last Major. They started their journey from the open qualifiers and got as far as the Legends Stage, where they exited the competition with a 0-3 record after giving some more established teams a run for their money.

The worldwide community took note and BNE quickly became fan favorites with their explosive playstyle and candid interviews. This time around they come to the Major with a much bigger reputation and teams are unlikely to be caught off guard by their unorthodox playstyle.

Bad News Eagles‘ history is short but sweet. Coming from the tiny country of Kosovo, which has a population of just under two million, the lineup’s members first made their name by playing in FACEIT’s pug system. They started to get used to seeing famous names alongside them on the server in FPL, quickly earning a reputation for their impressive aim. It was then that the Kosovo superteam idea came about: “I said ‘I think this is the moment, we have five Albanian FPL players,’ and we were really getting along with each other,” Flatron “⁠juanflatroo⁠” Halimi said. “I just knew, inside of me, that something would click — we would make something out of it.”

Bad News Eagles didn’t get out of the scene’s lower reaches for the first few months, as success didn’t come easy for them. The lineup stuck together through their tough beginnings, and they soon got a breakthrough on the world stage when they made the Legends stage at the PGL Major Antwerp to make history for Kosovo. Bad News Eagles got wins over Eternal Fire, Imperial, and MIBR to make it to the Legends stage, where their lack of experience meant they bowed out winless with an 0-3 record. The lineup still defied expectations, won the hearts of many neutral fans and put Kosovo on the Counter-Strike map for the first time. They also received a visit from the Kosovo Prime Minister after the success in Antwerp, which is a testament to their impact on the local community.

One of the reasons for Bad News Eagles‘ popularity is that they encapsulate what CS:GO and the openness of the Majors are all about — they are the epitome of a team coming out of nowhere and taking the world by storm. They never played in a Big Event before they qualified for Antwerp, only receiving exposure to the world scene when playing in FPL. Bad News Eagles had to start realizing their dream of qualifying for the Major in the open qualifiers, a feat they passed with flying colors. They were also the first team to qualify for the Major without organizational support since 2014, when dAT attended ESL One Cologne.

The lineup isn’t young despite the lack of experience, as their average age comes in at 25. They come into their second Major having already experienced the distinctive feeling of playing in the biggest tournament of the year, but their inexperience comes in the form of playing matches in front of a crowd. Considering the passionate Brazilian spectators will be present from the Challenger stage onwards, Bad News Eagles‘ opening game against the home heroes of 00NATION means that they are in for a fiery introduction. 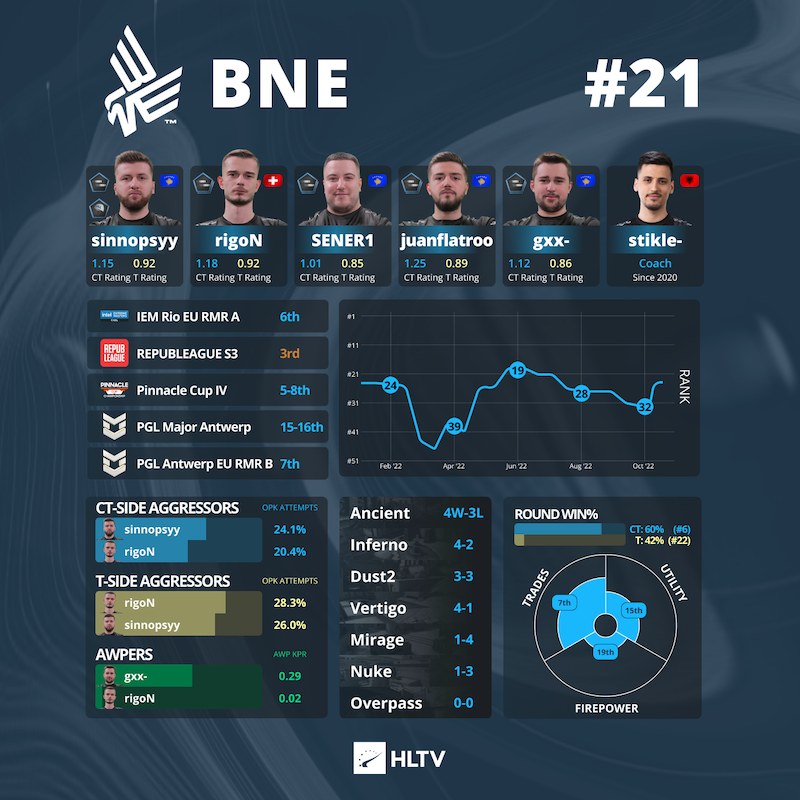 The success that came from qualifying for PGL Major Antwerp meant that Bad News Eagles expected offers from organizations in order to build structure around the players and coach. “If we get a spot at the Major we’ll probably get something big,” rigoN said before the Antwerp RMR, “so it’s all in for us at the RMR.” That offer never came, however, at least not one that the Kosovar team deemed good enough to commit to for several years.

Turning down organizational offers pushed the team in a different direction, as they decided to set up their own brand. Bad News Eagles became a standalone entity in the world of esports, the team keeping the name with which they made their mark on the world scene. Their decision of representing themselves keeps the teams’ options open for the future, showing interested parties that they are satisfied with going solo for the time being and are prepared to wait for the ideal offer.

Bad News Eagles set up their own brand in August

A side effect of not playing for a known organization is the lack of exposure between Majors, as the CS:GO ecosystem becomes increasingly franchised every year. Because of that, Bad News Eagles have predominantly played in the tier-two scene, dominating the competition with a 75% win rate in the last three months and placing in the top four or better in every lower-tier event they attended during this time. Their only real experience against top 30 teams came in the RMR, where the team faced off against several established names, beating Eternal Fire, Astralis, and forZe to make it through. The team’s losses at the tournament showed some worrying signs, however, as they got outclassed in their battles against Spirit and Ninjas in Pyjamas, who belong to the caliber of teams they will face at the Major.

High energy in and out of the server

Bad News Eagles is one of the most energetic and passionate teams in the CS:GO scene. The raucous celebrations and honest interviews, usually led by juanflatroo, have given the community an insight into their passion for the game and its competition. Relentless aggression is the essence of the Bad News Eagles when they step inside the server, akin to their loud and lively personalities outside of the server. Their start in CS:GO is undoubtedly a massive influence on the playstyle, as all five members began their road to professional CS by grinding through the pug systems of FACEIT to achieve recognition in the highest league.

An aggressive playstyle marked the essence of Bad News Eagles‘ early days, but their play has since evolved to be more competitive against the top teams in the world. This change enables the Bad News Eagles to go back to a more default-heavy playstyle, making them much harder to exploit than previously. It also changes their style to a more conventional one, with the chance to unleash chaos still a possibility for them. 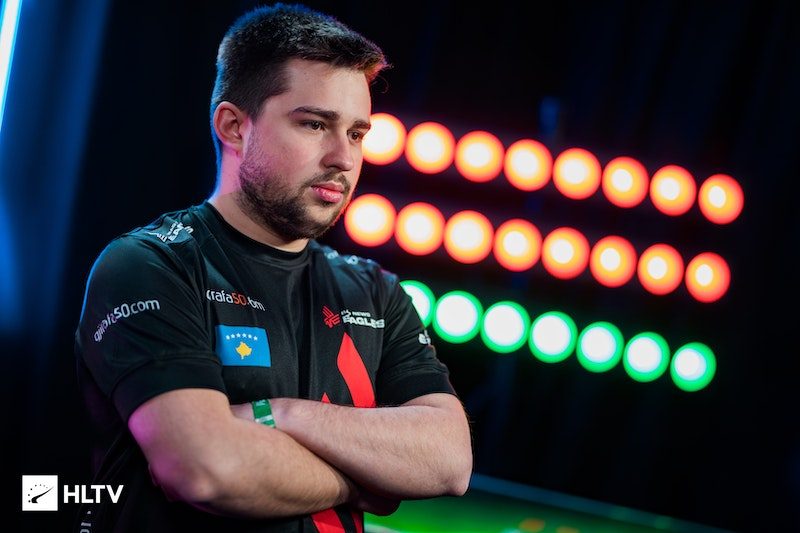 gxx- has improved his individual level, with the AWPer now a consistent third star for the team

You can clearly see the players enjoy playing with each other and consider each other to be as close as family, Rigon “⁠rigoN⁠” Gashi said: “We’re friends outside of the game, as well, we’re like brothers.” That brotherhood helps them stick together through hard times when the going gets tough and win against the odds, as they have time and time again. One of the most recent examples of their resilience happened in the RMR’s deciding series against forZe, where the Kosovar team came back from 11-4 down on Ancient to book their spot at the Major. “We are known as a comeback team, we’ve done hundreds of them. When we get into that feeling of the game, we just know we’re gonna fucking come back,” said juanflatroo in the post-match interview, holding back tears of joy as his team made the Major once again.

rigoN said before the Major in Antwerp that qualifying for the Legends stage would be “a life changer for every one of us.” Bad News Eagles are a team with no organizational support and are therefore financially dependent on tournament winnings to enable them to keep playing the game they love. Qualifying for the Major is the largest financial windfall in CS:GO, with even some of the biggest organizations dependent on the sticker money, believed to amount to a minimum of around $1 million per team at each of the previous two Majors.

For a team of five players and a coach such as Bad News Eagles, the Major provides a financial boost of mind-boggling proportions. Even though the team set up their own brand, a prominent organization coming in to sign them would surely be worth at least some contemplation, especially at a time when several big names are rumored to return to Counter-Strike after missing out on the VALORANT franchising, TSM being the first to publicly announce their intentions to launch their division. Therefore, a Major isn’t just their chance to keep playing CS:GO professionally but also an opportunity to put themselves in the shop window on the world’s biggest stage.

Outsiders – To be released on October 20

Vitality – To be released on October 21

Imperial – To be released on October 21

IHC – To be released on October 22

FURIA – To be released on October 22

BIG – To be released on October 23

Ninjas in Pyjamas – To be released on October 23

Sprout – To be released on October 24

MOUZ – To be released on October 24

Spirit – To be released on October 25

GamerLegion – To be released on October 26

ENCE – To be released on October 26

Grayhound – To be released on October 27

Liquid – To be released on October 27

Heroic – To be released on October 28

Natus Vincere – To be released on October 29

Evil Geniuses – To be released on October 29

Cloud9 – To be released on October 30

FaZe – To be released on October 30